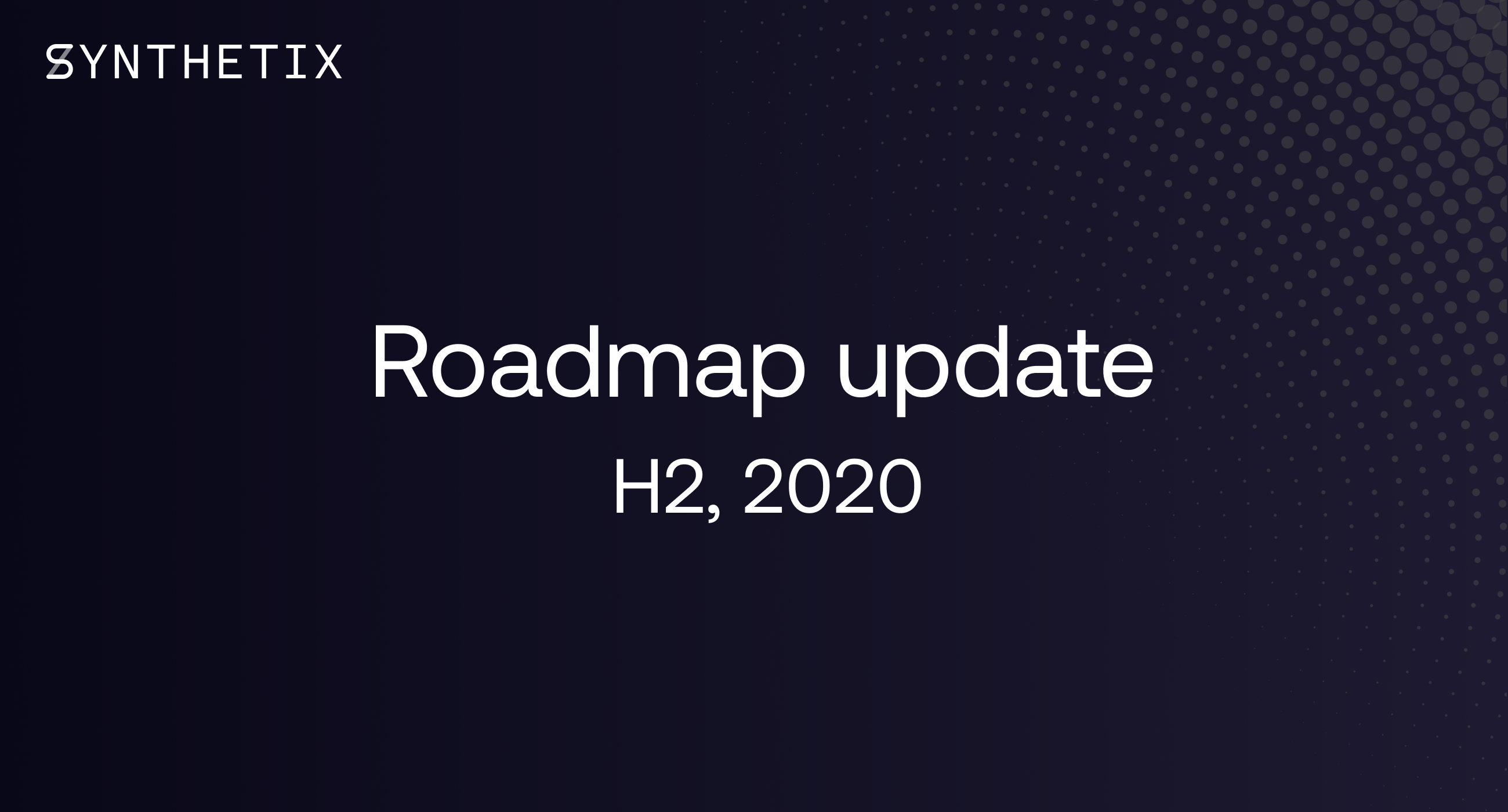 At the start of the year, we published the Synthetix roadmap for 2020 as well as a more detailed product roadmap with upcoming updates to Synthetix.Exchange. It’s been a huge year for the project and its various contributors, and this post will outline what is planned for the rest of the year for Synthetix.Exchange and the continued transition to decentralised governance.

But before that, here are some quick summaries of what has already been accomplished in the first half of 2020.

It’s crucial to the future of the protocol that additional trading features are added as generating more trading volume will generate more fees for SNX stakers, and there are still many exciting new features for Synthetix.Exchange planned for the second half of 2020. These include the following:

Limit orders is an important feature for trading on any exchange, but is far easier to implement on a centralised exchange. However, it will be a major step forward for the trading community when limit orders are added to the suite of features on Synthetix.Exchange, with infinite liquidity and zero slippage, all on a non-custodial platform. Limit order trades will be carried out through a separate, purpose-built smart contract.

Synthetic futures is a major new feature that is expected to make up a majority of future Synthetix.Exchange trading volume. This will allow traders to open leveraged long or short positions on any supported asset. The range of assets enabled by the Synthetix protocol will open many new trading possibilities, as will the debt pool’s counterparty-like mechanics, which can help reduce the friction of taking certain positions.

Another advantage of synthetic futures over perpetual futures on other platforms is that liquidated positions won’t require the underlying asset being liquidated. Since the trader is not posting collateral directly, this eliminates the need for margin calls and enables higher leverage than most other platforms currently support. Please note that the specific mechanics for synthetic futures are still yet to be finalised.

ETH and BTC as collateral

The first Ether collateral trial has been completed, and a second one is currently being planned. Allowing people to borrow against their ETH to trade directly on Synthetix.Exchange will be even more important as more trading features are added. Allowing traders to retain exposure to their ETH while using it as collateral to gain exposure to a range of DeFi assets through the upcoming rebalanced sDEFI index token will be just one of many different moves we’ll see.
There are also plans to allow at least one flavour of BTC on Ethereum to be used as collateral to start trading on Synthetix.Exchange.

Over the last few months we have been working with external designers on the Synthetix branding to align it with the identity of the project. The new branding will unify the various dApps and interfaces under the Synthetix brand and synthetix.io domain, clarifying how they all connect to the Synthetix protocol.

Relaunch of Synthetix.Exchange under a new brand to more clearly distinguish it from the Synthetix protocol. This will include major updates to the onboarding and trading experience to make Synth discovery far easier.

There have been a range of incentives already distributed in the first half of this year to bootstrap initiatives. These include various liquidity pools, and indeed there are likely to be more incentivised liquidity pools in the rest of 2020. But one other initiative we’re looking to incentivise is to bootstrap trading on Synthetix.Exchange when the range of available features has reached a sufficiently high level. This will probably be implemented in the detailed manner outlined in the SIP, but is also subject to change. In addition to the trading incentive we will also soon launch an integrator volume incentive, that will pay a rebate to platforms and dapps that directly integrate Synth exchanges.

The demo of Synthetix.Exchange L2 trading on the Optimism Virtual Machine earlier this year was a huge success for demonstrating the amazing user experience for trading on Optimism’s generalised Layer 2 solution. Depending on when Optimism is ready to launch on mainnet, Synthetix will look to be a launch partner.

SIP-62 implements a price feed index calculation for aggregating futures prices into a single reference price. The initial reference price will be for WTI (west texas intermediate crude, or sOIL) but this SIP lays the groundwork for any sufficiently liquid futures based asset to be integrated as a Synth.

It’s also key for the project’s progress that Synthetix moves forward in both decentralisation and security, which are closely linked. The reasoning behind this focus was outlined in a post at the end of 2019, which said “The goal is to get the protocol to a point where it is resistant to capture, whether from a nation state or an individual malicious actor.”

Here are the primary updates to make Synthetix unstoppable that are still to come this year:

As of phase 0, the protocolDAO is a Gnosis Safe multisig that is now the owner of all mainnet contracts for Synthetix, and phases 1 and 2 involve transferring ownership to a delegated migrator contract, which will be owned by the Gnosis Safe multisig. It also controls a system pause function to be used in situations concerning upgrades or security. Two circuit breakers have been implemented, the Synth circuit breaker and the decentralised circuit breaker both of which prevent trading in the event of a price shock.

Phase 2 of the protocolDAO will be the release of the delegated migrator and the veto contract. These will ensure that future upgrades to the system can be vetoed under certain conditions by token holders.

Synthetix’s integration with Chainlink to use its network of decentralised oracles has been a huge success so far, but it currently only accounts for the fiat currencies and commodities. The next step is to use the Chainlink oracles for all the assets available on Synthetix.Exchange, which will be another major milestone for the project’s decentralisation.

Phase 1 is the migration of all Synthetix treasury assets to an on-chain DAO. This is dependent on the escrow contract migration SIP (SIP-60).

When an Inverse Synth hits its upper or lower limit, it is frozen, and its entry price and limits must be reset. Currently, only the protocolDAO can do this, which results in delays and a bad user experience. By making these functions public and paying a fee in SNX for anyone who resets an iSynth we can significantly improve the user experience.

As the Synthetix Discord server has over 11,000 members, it’s important that the Synthetix community has the right platform to facilitate healthy discussion around key governance questions for the protocol. We have just opened up Research.synthetix.io, which is a message board that will house only considered, thoughtful discussion around topical governance issues, with Discord continuing to house discussions at their earlier stages.

This is only a high level overview of the major plans for the protocol. There will also be a range of smaller enhancements to improve the project in a variety of ways. To stay in the loop for more details on what Synthetix is working towards, check out any of the following channels: