Let’s start with the highlights, shall we?

Yup, it’s that time again! Get ready to recap another exciting quarter for the Synthetix protocol and community. There’s been a lot of big news in the broader crypto market in Q4, but before we get into all that, let’s review the highlights of the epoch.

After quite a bit of back and forth on the details, the ability to liquidate escrowed SNX entries was finally implemented! To understand the implications of this upgrade, we need to discuss a bit of background in other system features: Liquidation is a process that keeps the overall debt health of the protocol within spec, as defined by the Spartan Council (via changes to c-ratio requirements). Earlier in the year, liquidations were socialized which made stakers the only buyers of liquidated SNX. But one remaining issue was that SNX rewards for stakers, which are locked for a 12-month period, were exempt from liquidation prior to this update.

We also saw quite a bit of movement on Perps V2 in Q4, which was released on mainnet at the end of December. The objective was to take everything learned from the original perps implementation and iterate towards a design that can support broader asset compatibility and efficient execution, while also delivering a highly competitive product that would attract users from centralized exchanges. To allow for a period to review performance, this went live with an initial alpha offering only ETH with limited open interest caps. But we should start to see the training wheels come off in the upcoming epoch — stay tuned!

The Grants Council also stayed busy this epoch, leveraging community talent to fill the gaps in protocol needs. In Q3, they delivered the Wrappr UI (for which the capacity has been increased substantially since launch) and in Q4, they continued work and eventually delivered a Loans UI that makes it easy for users to open ETH-backed sUSD loans.

The Ambassadors continued to make connections with other DeFi protocols this past epoch with the power of 5 members instead of 3. They hosted several Spartan Spaces, some of which led to powerful integrations. A big win for the Ambassadors this epoch, however, was overcoming some technical difficulties and regaining access to their Optimism delegate wallet. When the OP token was launched with airdrop 1, anyone claiming the airdrop had to delegate voting power for their tokens. Unfortunately, the Ambassador wallet that users were delegating to was an L1 ETH multisig that they were unable to use for governance activity on Optimism. With some help from Ethernaut, they eventually made it work and, in the meantime, were delegated some OP from the Treasury Council to another wallet so their intended voting power could be put to use.

Any great quarter is going to come with some challenges…and for Q4 it seems like the natural place to start is with the FTX collapse. Though not a Synthetix-specific challenge, massive system shocks like these can damage trust, and the burden to pick up the pieces generally lies with those who remain. At the beginning of November, it was revealed that the second largest centralized exchange in crypto had a multi-billion-dollar hole in their balance sheet. Without going too far into the details, the wave of withdrawals and liquidations sent shockwaves throughout the sector.

That being said, one of the long-lost tenets of decentralized digital asset management has been brought back to the limelight: self-custody. “Not your keys, not your coins” is one of the earliest crypto memes (dating back to the Mt. Gox days), but every now and then it becomes a harsh and unfortunate lesson for some. On the bright side, failures of centralization should push users to see decentralized alternatives in a more desirable light, which would represent a shift in sentiment on which Synthetix is uniquely positioned to capitalize.

But as far as more protocol-level challenges go for Q4, we’ll focus a bit on Synthetix oracle providers. To deliver on all the promises of Perps V2, it became clear that a new oracle framework was necessary. Pyth stepped up to the plate offering the missing link of the proposed hybrid oracle solution necessary for Perps V2. There was some initial reluctance in the community, given the longstanding relationship with Chainlink, but to facilitate protocol growth and make the offerings more competitive, the Pyth proposal ended up passing with only one vote against. The discussion surfaced some tension in the community, with several noting that diversifying infrastructure providers can help the protocol progress more quickly. There are now calls to deploy Synthetix on as many L2s as possible, spreading much needed liquidity and adding value for stakers through additional integrations.

Along with their contribution to the achievement of some major Synthetix milestones this epoch, let’s take a minute to review everything else that the Spartan Council was able to achieve in just the last three months.

October was the month we finally got the Escrow Liquidations SIP previously mentioned, and it went out on the Aspidiske release at the end of the month. We also saw an Optimism integration with Binance that allowed users to deposit and withdraw funds on Optimism directly to a centralized exchange.

The major output, however, was the first official definition of the Perps V2 scope. SIPs 279, 280, and 281 described the improvements that the Core Contributors (CCs) hoped to make in this next iteration of perps, along with how they intended to transition users from the V1 contracts. We got to hear from Afif and the Ambassadors in one of the office hour specials of the epoch in a deep dive of the proposed core mechanisms, along with the future of on-chain perps.

November kicked off with the Suhail Release and the ability for protocols to directly integrate with Synthetix. This marked a huge improvement for users of protocols that integrate with Synthetix. Previously, all transactions handled by the protocol were treated identically regardless of the source, which meant different integrators with different conditions were all subject to the same measures designed to protect against bad actors.

The Direct Integration SIP allowed for integration-specific configurable parameters. The ultimate goal, and result, was that these integrators with their own built-in safeguards would be able to pass lower, more competitive fees to their users and drive more volume in a way that is still safe for the Synthetix protocol.

We also got a major V3 update in November from Noah. You may recall, the first phase of V3 was debuted a couple epochs ago with the launch of the first fully on-chain governance module (V3GM) …and a lot more has happened since then. At the end of November, the Alphecca Release went out to facilitate the smoothest transition possible by executing minor upgrades in V2X to support the migration. While there is still no official release date, the CCs are shooting for the end of January to begin the migration process.

Currently, the code for V3 core is frozen and is in audit with 3 separate firms auditing different mechanisms in the new contracts. CCs are addressing feedback from the auditors as it rolls in, and we will be sure to keep you updated on the progress as it gets reported in the weekly syncs!

In December, the much anticipated Staking V2 dApp finally went live. The CCs have been working tirelessly to deliver a cleaner, more approachable version of Synthetix staking features. The result was just an overall better UI and lots of positive feedback from the community. It looks very polished and includes links to helpful sUSD utilities with integrators.

To close out the month, quarter, and year, the initial release of Perps V2 was deployed at the end of December. This is the latest iteration of one of Synthetix’s most successful products that has brought the user base a long way from the 13 trader days. Perps V2 was launched with some restrictive parameters to give Core Contributors a chance to review live performance data and address any bugs in alpha before a full release later on this epoch.

As always, the Grants Council has been hard at work improving the protocol with their carefully vetted grants and initiatives. Here are this quarter’s highlights from them:

Synpress is an e2e testing framework based on Cypress.io and playwright.dev with support for metamask. It is a pioneer tool in web3 e2e testing, with the potential to evolve into a decentralized network of test runners (and CI provider) in future.

Towards the beginning of the epoch, the Grants Council sponsored this initiative, which was a Whale Trading research experiment by Kwenta. The objective was to get a couple of whales to come trade on Kwenta and then get information from them via an exit interview. The incentive was that ALL of their trading fees would be covered, via a Fee Rebate from the Grants Council. To qualify for this Fee Rebate, they had to trade a minimum of $1 million. Kwenta was able to onboard 3 whales who went through the program. Their overall trading was a loss…so good news for stakers! However, the feedback that the Council received from Kwenta was that they learned a lot and that the initiative was an overall success. 🏆

This one is short, but sweet. The new SIP/SCCP site that we all know and love got a few updates this quarter: the web app now has a WYSIWYG editor and image embedding! Talk about easy SIP-proposing.

This is a BIG ONE! Arguably the highlight of Q4 for the Grants Council, the new UI for Synthetix Loans was a great success. This dedicated site now allows you to manage your sUSD or sETH loans, with new features including viewing your liquidation price and previewing your c-ratio when managing your loan. The Grants Council wanted to make sure this site was perfect for users, so they started a thread on Discord inviting community members to share their experience and any feedback from using the site.

The Grants Council has also continued to maintain their support in hosting and maintenance for various Synthetix bots, including the ever-so-helpful Telegram bot.

Lastly, the Council continues to sponsor the stipend for the 300 Lieutenant, milkywave, who leads the 300 Spartan group and administers tasks to help grow and publicize the protocol. Shout out milkywave!

What’s next for the Grants Council?

Yup, we have another leak for you! Can you spot the Kain NFT?

These NFTs are a long time coming, but they look like they’re going to be worth it. We’re all so excited for them to finally drop!

The Ambassadors had another successful quarter of integrating with other protocols and just being overall great voices for Synthetix. Here’s everything they accomplished over the last few months:

3. Fast bridging support for SNX and sUSD on HOP Protocol

What’s next for the Ambassador Council?

The Ambassadors are continuing work on their YouTube channel, that they hope to have published this epoch, where they will upload past and future Spartan Spaces so the community can listen to them forever!

In addition to this, the team has also outlined some overall goals for the next quarter:

The quarter of course wasn’t without humor, so here are our favorite memes from the epoch:

See you next quarter, Spartans! ⚔️ 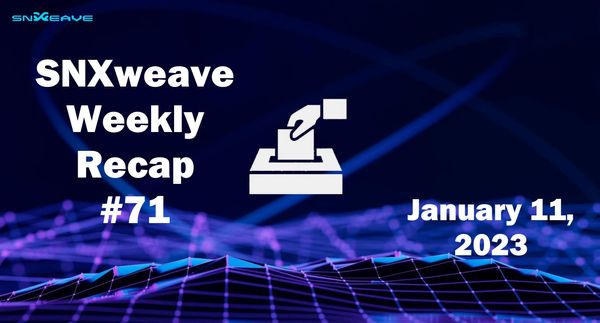