With the holiday season upon us, chaos ripping through the crypto industry, and Synthetix V3 entering audit, I thought it might be beneficial to summarize my perspective on where Synthetix is right now and where it could be going. Everything included here is my personal opinion. I don’t represent other Core Contributors or any of the DAOs that govern the protocol. Developments in DeFi and my opinions are rapidly evolving, so this should be treated as a snapshot.

Currently, most efforts among the Core Contributors are focused on the upcoming launch of Synthetix V3. We’re on track to kick off the migration process in January. Outside of this, we’re rolling out improvements to the spot markets (optimized for cross-asset swaps) and perpetual futures markets, as these are both proven revenue drivers for the protocol.

For the uninitiated, Synthetix can be confusing. I’ve attempted to explain this “derivatives liquidity protocol” in a previous post. In short, Synthetix is decentralized infrastructure that allows for the creation of crypto assets that track the value of other assets (like dollars, other currencies, commodities, and anything else with a price feed). This is a more ambitious project than most “DeFi primitives” and it involves many components.

Liquity is a protocol that issues the LUSD stablecoin and operates on a similar principle as MakerDAO. With an efficient liquidation mechanism, governance minimization, and issuance fees rather than interest, this was a significant innovation over MakerDAO, though it suffers from some scalability issues as well.

Synthetix’s sUSD stablecoin is partially collateralized with wrapped LUSD to support its own scalability. Synthetix’s governance rejected a proposal to wrap DAI due to its lack of decentralization. This was hotly debated. Many who rejected the DAI proposal subsequently felt vindicated during the events surrounding OFAC’s sanction of the Tornado Cash smart contracts, where the possibility of DAI’s censorship suddenly went from a concern for conspiracy theorists to a serious consideration.

A crucial feature of Synthetix V3 is that it’s collateral agnostic. Governance will be able to set risk parameters tuned to various collateral types. With a liquidations mechanism as efficient as Liquity’s, the protocol should be able to offer stablecoins backed by ETH with similar collateralization requirements, but without an issuance fee. (Liquidity providers in Synthetix are instead incentivized with market performance, like exchange fees.) Synthetix is also able to leverage markets that are more tightly coupled to the core system to increase stablecoin scalability in ways that Liquity cannot.

Put simply, building a scalable decentralized stablecoin is a core challenge that Synthetix is addressing. We can’t really have decentralized finance without one.

Similar to how Synthetix can be understood in comparison to decentralized stablecoin projects, it is also often compared to various protocols focused specifically on building perpetual futures markets. A key differentiator is that Synthetix is primarily focused on building a robust liquidity provisioning protocol that can be used with any type of market (including spot, options, insurance, and anything else that can be implemented with smart contracts). The Synthetix community has also traditionally put a much greater emphasis on decentralization and censorship-resistance than other protocols.

For instance, some perpetual futures market implementations rely on their own off-chain oracles, but are announcing plans to use a new oracle system we designed with Chainlink. Many are also dependent on USDC. If Synthetix V3 is successful, it should be an obvious choice to use Synthetix for liquidity provisioning and remove this dependence on a centralized stablecoin.

Synthetix’s Core Contributors plan to continue iterating on perpetual futures markets built on our infrastructure. Our roadmap includes more innovative and robust financial mechanisms than implementations currently in use. But, perhaps more importantly, we can leverage markets more tightly coupled with the core system to solve scalability and cross-chain challenges. For example, an ETH perpetual futures market could accept ETH and issue an equivalent value of stablecoins. We might also leverage synthetic assets to distribute collateral from socialized liquidations across chains.

In addition to collateral agnosticism, a crucial feature of Synthetix V3 is greater composability and permissionless functionality. A goal of the architecture is to allow anyone to build a custom market implementation, register it with the system, and then have pools of liquidity in the Synthetix protocol opt into providing it with credit. Our market implementations are being constructed as “factories”, where end users (even through a simple web UI) will be able to deploy new assets by specifying a price feed, fee structure, and other configurable parameters.

Ultimately, the creation of markets will become trivial. The valuable, difficult problem that needs a solution is scalable decentralized liquidity provisioning.

The roadmap for Ethereum involves end users interacting with a variety of layer two scaling solutions (L2s) like Optimism instead of mainnet. Unfortunately, this introduces various complexities pertaining not only to user experience and security, but also liquidity provisioning.

Synthetix is deployed to Ethereum’s mainnet and Optimism. The protocol currently solves the problem of fractured liquidity with the debt pool synthesis, an oracle that that effectively reports the aggregated credit and debt from both networks to both networks, such that collateral on one network can back the debt on another. This is the only major DeFi protocol with such a solution as far as I know.

Cross-chain plans are under development for Synthetix V3, which will become a top priority after the migration is underway. The current draft proposal entails a system that will rely on Chainlink’s CCIP (which is really “CCIP Write”) to synchronize configuration across chains. It also proposes a system that heavily relies on EIP-3668 (CCIP Read) to read cross-chain data on-demand, similar to the oracle system referenced above. This will not only allow different sets of pools to be synthesized across chains, but also resolve some scalability issues pertaining to gas usage.

For end users, this will unlock a new paradigm for UX. Dashboards can display aggregated values across chains to users, completely abstracting cross-chain considerations. When a user decides to take an action (e.g. provisioning liquidity to a pool), a separate dialog can queue the necessary transactions on various chains to achieve the desired outcome, similar to an order router.

Further, the ability to scale the protocol is closely coupled with the ability to rapidly iterate. Synthetix was a very early DeFi protocol which has been highly innovative. While leading the way with some aspects of smart contract development (e.g. many consider the Staking Rewards contract to be one of the most forked smart contracts in existence), the complexity of the project and infancy of existing tooling early on has led to some non-trivial technical debt.

The Core Contributors are taking V3 as an opportunity to start fresh. The proxy architecture and deployment tool we’ve developed should allow iteration orders of magnitude faster than before and make it seamless for ecosystem partners to develop integrations as well. Between the difficult work involved with improving the existing V2 codebase and the innovation occurring in the V3 codebase, I’m constantly impressed by the quality and pace of the engineering work being completed by fellow Core Contributors (especially given how decentralized the organization is itself).

In light of recent events, it has become apparent that the only serious path forward for consumer protection—in a world where financial institutions can simply operate under the most permissive political jurisdictions—is to build truly decentralized and transparent financial infrastructure. Adoption will be driven by solutions to the engineering problems that enable a user experience rivaling that of centralized services. This won’t happen overnight, but it will happen.

Wallet and trading apps are largely there. The most critical layer of the stack is a scalable, truly decentralized derivatives liquidity protocol that enables exposure to off-chain assets. This will allow DeFi to have real utility.

Check out the Synthetix V3 prototype and provide feedback in the #synthetix-v3 channel on Discord. For more details, check out this Twitter Space and review the (frequently updated) draft 300-series SIPs. 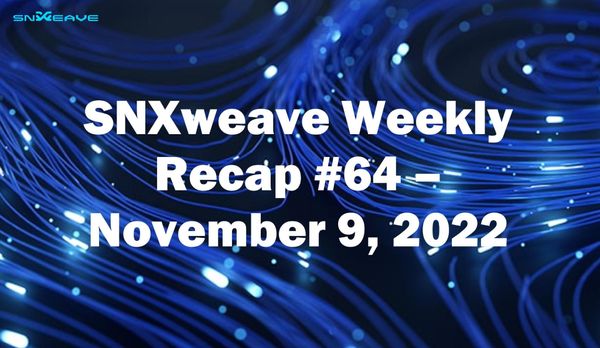