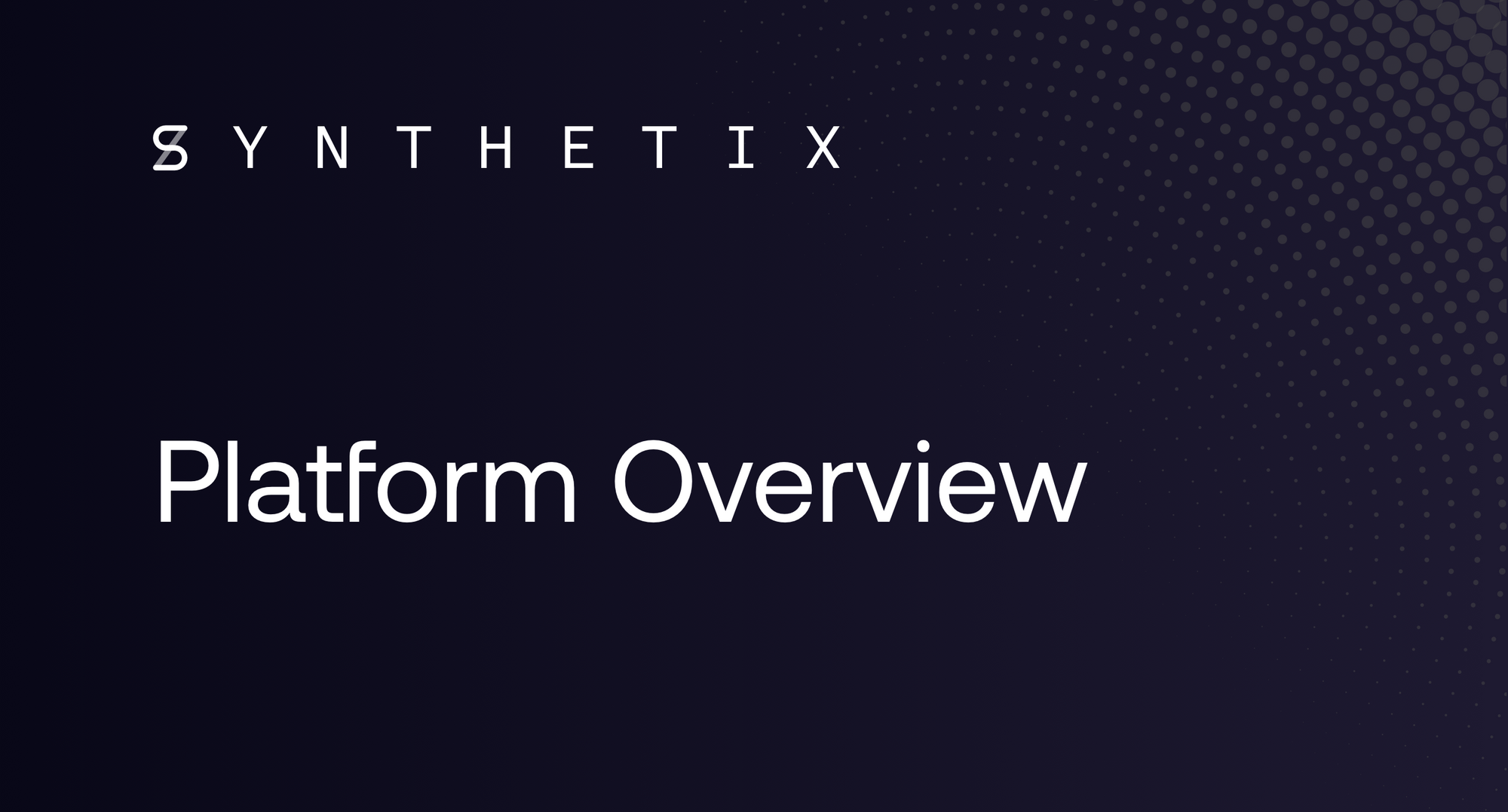 The Synthetix platform enables the creation of on-chain synthetic assets (Synths) that track the value of assets in the real world. Some examples of assets that the platform supports are synthetic fiat currencies (sUSD, sAUD, sKRW, etc.), synthetic commodities such as gold (sXAU), as well as more complex assets such as equity indices.

This overview will explain how the system enables the creation of these assets as well as some of the considerations in its design.

What is a synthetic asset?

Synthetic assets allow you to receive the benefit of holding an asset without actually holding it. Before going any further, many people would want to stop you here and ask why. Why would you want to hold a synthetic asset instead of just holding the asset itself?

There are many answers to this question, but the fundamental reason people hold synthetic assets is that they receive some benefit over simply holding the underlying asset. The benefit could be access, such as in the case of gold where someone wants exposure to gold without having to deal with custody. It could be liquidity, where someone wants to be able to easily enter and exit a position that would be difficult to do with the underlying asset.

But in our case the answer is very simple, people will want to hold on-chain synthetic assets because they get the benefit of holding the underlying asset plus all of the advantages of a decentralised platform.

What are the benefits of Synths?

The first use case for Synths was stablecoins, the ability to hold a token that tracked the value of a fiat currency without needing to hold the fiat currency. The benefit to holders of these tokens is being able to transfer value in an agreed upon and widely accepted denomination without needing to rely on a third party to hold collateral. This will be hugely beneficial once we have wide scale decentralised marketplaces, as new users will feel much more comfortable converting fiat into a cryptoasset denominated in their local fiat currency, and then using that to purchase goods and services on decentralised platforms.

How are Synths traded?

The benefit of using a shared collateral pool is that Synths can be converted between different flavours without a counterparty. The pool of all collateral holders essentially acts as the counterparty. So someone holding sUSD can convert that Synth into sAUD at the current exchange rate without needing to find someone who is holding sAUD to trade with. This, combined with our Synthetix.exchange platform, will allow users to quickly swap between different commodities and fiat currencies, paying only for gas and the Synthetix Network fee.

How does Synthetix work?

The platform uses a token called SNX (the Synthetix Network Token), and holding this token allows you to create Synths. You do this by locking SNX into a smart contract and minting Synths against this value. In order to ensure Synths are fully backed, the system will only allow you to issue a fraction of the SNX value you lock. The system currently requires that you lock five times more value into the contract than the Synths you mint.

Where does SNX derive its value?

The SNX token is the core of the Synthetix Network; it is what allows people to participate in minting Synths, and provides the collateral to back them. As mentioned earlier, a decentralised system of synthetic assets will have huge benefits for users. Users will be willing to pay for this utility in the form of transaction fees when they transfer Synths. These fees are paid to SNX holders who have minted Synths and maintain a healthy collateralisation ratio. This feedback loop allows the value of the SNX token to grow as the network gains adoption, allowing more Synths to be minted and increasing adoption even further.

What is the role of an SNX holder?

SNX holders act as both issuers of Synths as well as maintainers of the system. They hold a pool of collateral value in the form of SNX tokens that underpins the network. They are rewarded for performing this role with a portion of the fees generated by the network. This is an active role and requires awareness of the state of the system and willingness to respond as required when the system is out of equilibrium. SNX holders who actively maintain the collateralisation state are rewarded with a higher proportion of fees than other SNX holders.

How does the system track the position of each SNX holder?

As described above, Synths can be swapped without needing a counterparty. This is obviously extremely useful for the holder of the Synth, but it can create some additional risk for both SNX holders and the system.

Consider a scenario in which Alice mints sUSD and then trades it to Bob in exchange for ETH. If Bob receives the sUSD and later decides to convert it to sAUD, the total debt in the system has not changed. But if the exchange rate shifts and Alice tries to buy back the sAUD to convert it into sUSD she will not have enough ETH to purchase it all back. Plus, the system would still think she owed the original amount of sUSD that she minted even though the exchange rate has shifted since then. This is why we track the position of the entire system through the debt register rather than each individual SNX holder.

What is the debt register?

The debt register is what allows the system to track the total outstanding value in Synths that have been minted by SNX holders. (Debt here simply refers to the value of Synths required to be burned to unlock an amount of SNX.) As exchange rates between these different Synths change, the total debt changes in the system. The way we handle this is we track the total debt and the percentage of debt for each SNX holder when they mint or burn.

So while Alice may have initially represented 100% of the debt, after hundreds of other SNX holders have issued she may only represent 1% of the debt. In order to determine Alice’s debt when she exits we simply take all of these changes and total them and then find her current debt percentage. Once we know this and the total network debt we can determine her debt obligation in Synths to exit the system and unlock her SNX.

If there is any risk to an SNX holder, it is that the debt they issued increases due to exchange rate changes. The most obvious example of this is that the debt they have issued appreciates against the value of the SNX tokens they locked to mint the Synths in the first place. This scenario simply represents the possibility of the SNX token declining in value against all other assets in the system.

There is a very simple solution to protecting against this for an SNX holder. When selling Synths, ensure that the proceeds of the sale are held in an asset that tracks the debt created so that it will be possible to buy the Synths back at any time.

While Synthetix was originally conceived as a single USD-tracking stablecoin, the potential for the system is far greater than this. We believe that the use-cases for stablecoins that can be freely converted between different currencies will be even higher than single currency stablecoins.