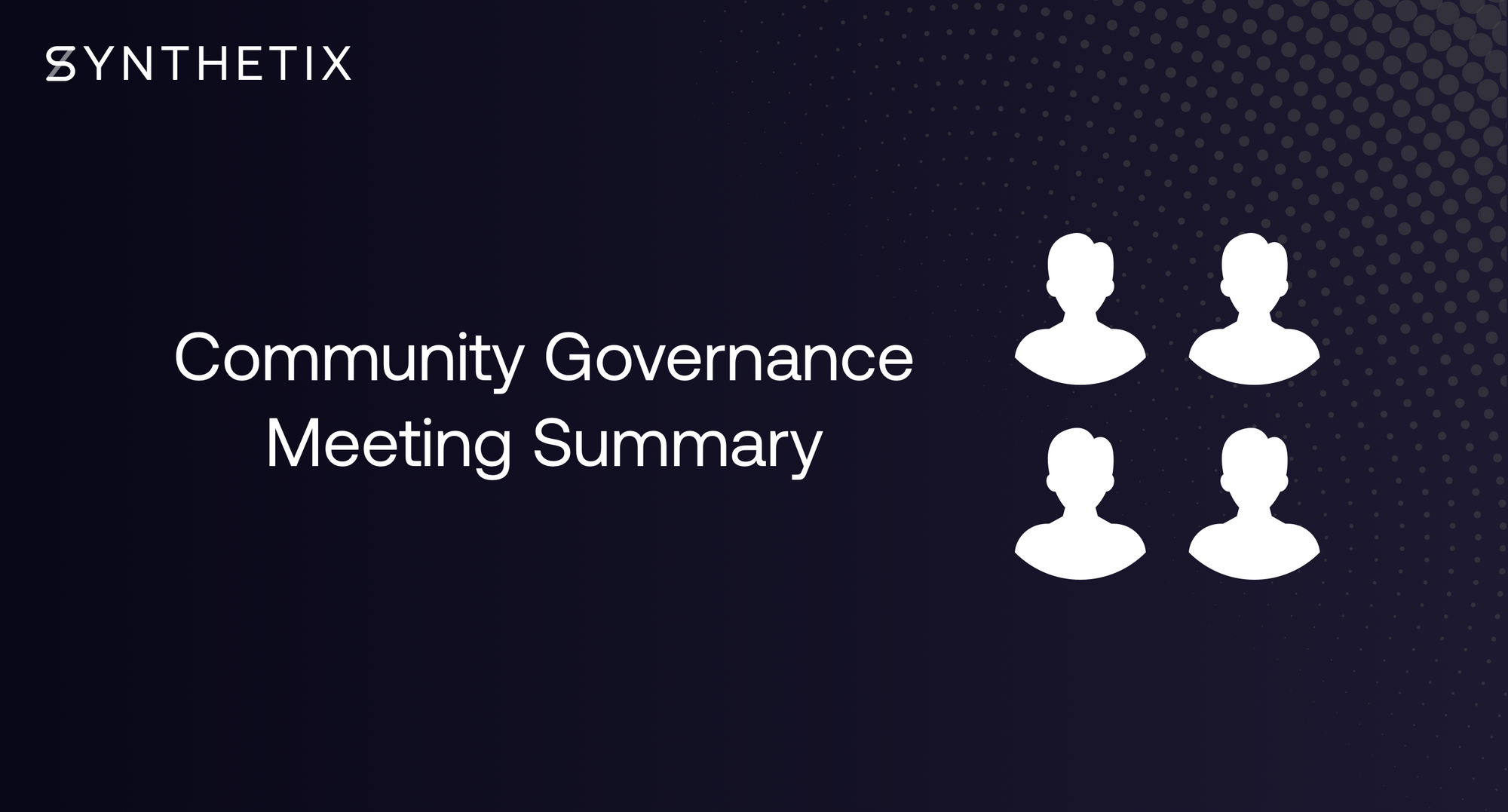 Thank you to community member CryptoToit for generously writing up this excellent summary of our first ever community governance meeting, and thanks to everyone who joined!

You can watch the full video of the meeting here.

[Jordan, Garth & Kain] Welcomes everyone to the first ever Community Governance Meeting.

[Kain] The main objective of these meetings is to introduce a more formal process in which the community is involved in critical decision-making on enhancements and changes to the Synthetix system.

[Garth & Kain] The team will strive to hold these meetings at different times to ensure community members from all around the world gets a chance to attend.

The next meeting will be held within the next couple weeks, as there are many critical decisions to make.

[Garth] We have already done one round of on-chain voting with the discussion of the EOS expansion.

[Kain] The Team has concerns as to “how” it should / could be implemented. We should rather continue with the “rough consensus” process that is currently being used, as it is working for now.

Will be using the #Governance channel on Discord as the main discussion and engagement area with the community.

[Alex] On-chain governance engagement is extremely low. This is something we might not have to address right now, but can do so in the future.

[Kain] Agrees that Tezos's on-chain governance has been doing well and that we can learn a lot from it.

[Garth & Kain] Synthetix has been build for active engagement and participation of SNX holders.

[Kain] Synthetix is implementing a process for ‘proposing and managing changes’ to the system. This change management process is based on Ethereum’s EIPs as well as other open source projects. It is a formal and a well-structured process. This process is called “Synthetix Improvement Proposal” – SIP. It is also done with the intent that anyone in the community can contribute. Here is the process:

- Anyone in the community is welcome to draw-up, submit and champion a SIP.
- Once a SIP is submitted, the team will discuss it to get the proposal to a polished state where they think it could work and implemented.
- The Team will discuss the SIP and its trade-offs (if any), internally as well as with the community for implementation.
- The SIP’s Champion and the Team will obtain “rough consensus” (without a token voting process for now) and agreement that a specific SIP should be implemented.
- After this it will be handed to one of the engineering teams to implement via their current product development processes.

a) Wider community engagement by proposing enhancements or new features, via a SIP, and championing that specific proposal.

b) Getting engineers from outside the Team engaged in this process, and help build these features as well.

The first community member to draw up a SIP and champion it through the review, approval and implementation phases; will get a Bounty of 10,000 SNX.

3.1 Issues with the sUSD Peg

[Kain] There is an oversupply of Synths, specifically sUSD. Even though the total supply of sUSD is low in comparison to other stable coins, the current demand is not big enough to justify / support the current supply.

It is far more important to have a low supply with a tight peg, than have a large supply off-peg. The feeling is that we have to aggressively raise the C-Ratio to get to this point.

Tight peg and liquidity is vital for the system operating well, with the current main use case in the DEX and trading on it with Synthetic assets. Other real word use cases will be worked on and come along in the future.

The only outstanding issue to resolve will be on exactly to what % it should be raised.

Discussing the similarities and differences between MakerDAO - DAI and Synthetix - sUSD systems on a technical level.

Demand for sUSD will come from people wanting to trade on the SynthX DEX.

The DSR align incentives. It creates a clear incentive to hold an asset.

A - It will only be discovered empirically and through experimentation. But there is a strong argument that it should be much higher.

Q – Should we not increase demand for sUSD instead of immediately increasing the C-Ratio?

A – This is definitely a major contributing factor to help stabilise the peg going forward. The focus to date has been more on development and getting everything around staking (minting) and DEX working properly. We have not been ready to push hard on marketing and bring masses of people to trade on the DEX. Awareness of the DEX will definitely increase. For now we have to fix the peg ASAP.

[Kain] One of the current mechanisms that is placing pressure on the peg is the ability for people to mint directly into their own accounts, and then sell sUSD at an off-peg (reduced) price for other assets.

There is one proposal, strongly supported by Anton (one of the original whitepaper authors) that could address this. It is proposed that minting should be done directly into the Depot and sUSD should then be bought back at a fixed $1 peg.

This is definitely a function that should be considered in the future, but the immediate concern is that it will have too big a negative impact on trading volume on the DEX in the short term.

[Kain] Some in the market is questioning the “soft-pegging mechanism”, where there is no direct redemption mechanism.

The idea is that if an account has minted sUSD and is out of alignment with the system collateralisation, and then someone else should be able to redeem his or her sUSD for SNX. Now the question is, under what constraints should this be allowed to happen? This does not make sense right now and will not fix the peg immediately.

A more controversial and aggressive option is that: Where the least collateralised position (account) is always available for direct redemption of their sUSD to SNX.

But this is not something that is being considered now. This would only be “last resort” (backup) go-to option.

The feeling of the Team and supported by the majority of the community is that the ‘Direct Redemption’ mechanism should be held off until we have restored the sUSD peg and then see if it is required or not.

The Team has submitted a proposal to increase the Collateralisation in the system. The objective is to reduce sUSD circulating supply.

The community will vote in Discord to agree on the % increase.

A “rough consensus” and support is obtained from the community to reduce the claim period. The exact period will be voted on in Discord.

[Jackson] We are looking at changing the fee penalty for when someone can claim, as well as removing the tiers we have currently. The objective is to have accounts on the required C-Ratio much more consistently. Accounts will also be penalised by not receiving any rewards if not complying with the system ratio.

General questions and discussions with the community members.

In an effort to expand and increase adoption of new SNX holders and DEX users materials should be translated into different languages.

[Garth] Language functions are going to be added to the main dApps: Mintr & Synthetix.Exchange. This will radically expand the usability into new regions.

The team will decide on the languages and the materials that need translation. It will then be opened up the community to help with the translation process.

A suggestion from a community member is to start with low friction & quick wins. To start with translating some of the Blog posts and then move on to the more technical documentation.

[Kain] One of the main demands is to have an updated System Overview document and to have it translated into a couple key languages. A new version of the system overview doc should be available within the next couple weeks.

4.2 The control the team has over the system

[Kain] Currently the team does have control over the system as they had to build everything from scratch. During these early, experimental days of the project they also had to quickly pivot the entire vision and approach of the system when they transitioned from a stablecoin only (HAV) to a multidimensional service offering with SNX. Without this control they would not have been able to pivot or pivot in time to put the project on this new course.

Kain and Clinton will sit down in the future and clearly define and document what controls the team has and to what extend. This will be shared with the community and will help with overall transparency.

The intent of the Team is to cut these bridges and remove the controls they have as soon as the main aspects of the system has been built and put in place according to the vision for Synthetix. At that point, control of the system will be systematically migrated over to the community to be managed via some kind of governance system.

[Garth] Moving to greater decentralisation, one of the main areas that need to be decentralised is the price oracle. Currently an internal controlled oracle is being used for all price feeds. The team is considering making use of a ChainLink node to provide a decentralised price oracle.

[Kain] The current oracle has been made as secure and robust as possible, but the team acknowledge that it has to be decentralised as a priority to remove this attack vector.

Justin, the team's CTO, is driving the ChainLink testing, which is currently still on Testnet.

[Kain] The Team is putting some info together on the regulatory status of Synthetix. From a practical & Australian legal perspective, the team is very comfortable with the system as it stands as well as the future planned developments. There are currently no regulatory concerns, but this will be clearly addressed soon.

The Block published a hard-hitting article on the Synthetix project.

The team does not have a huge issue with the article as it was written on the analysis of the old Whitepaper, which has not been replaced yet. The Team welcomes constructive criticism and are already addressing the main issues raised.

Some of the misconceptions have been addressed by Kain’s response to the article.

The Team has introduced 2 processes to manage changes to the system.

Discord has been updated with channels to support these processes.

Voting has been held on Discord after the meeting and consensus has been reached on a number of key decisions.

5.2.1 Rewards will only be claimable for 2 weeks

5.2.2 The optimal Collateralisation-Ratio will be set to 750%

5.3.3 Percentage buffer before SNX stakers can't claim will be set to 10%

5.2.4 The community will receive 2 weeks notice of these changes.

Join us on Discord to chat about these things or find out more about Synthetix!