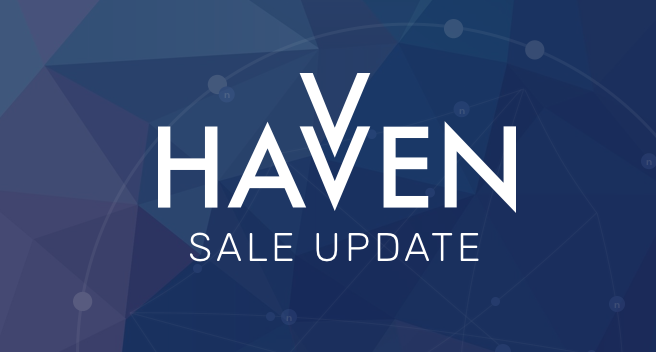 Based on feedback from the community, our advisors and investors we have decided not to increase the hard cap. We clearly underestimated the concern raising the cap would generate. Our reasoning for raising the cap was to create more collateral backed stablecoins in the network at launch and to allow more people to participate. In hindsight these were not sufficient reasons to justify the risk of being perceived as taking advantage of higher demand for access to the project. We attempted to alleviate these concerns by announcing the escrow of funds and the structure of the foundation but this was not enough to justify changing the sale terms. We have listened to feedback from the community throughout this process, including removing the KYC requirement for the airdrop, and we will continue to listen to the community as we roll out the network.

Thank you for your support,

Well, it has certainly been an exciting week! The community interest in Havven has increased dramatically in an extremely short period of time, and it has been wonderful to hear from so many people who are eagerly anticipating the launch of Havven.

However, the interest we are seeing in the project is starting to transition into concern from many members of the community that they will miss out on the sale. We have heard your comments, and have reviewed our options for addressing these concerns. We have decided that by modifying the sale terms and creating a pool for small purchases, a larger number of people will be able to participate. This post will address the changes to the sale structure.

For the last year our team has been focused on research and development of the Havven network, comprising thousands of hours of research and design. In August we transitioned to a more formal process, where we began to formally describe the system in the white paper. We engaged The Center for Cryptoeconomics to review the mechanism design to ensure the viability of the system from a game theory perspective. In November, we released the first draft of the white paper at Devcon3. However, this first draft had yet to fully describe the system. We iterated on this for almost two months while developing a simulation of the system. When we were satisfied that the system was well-specified, we started developing the smart contracts for the network. By the end of January this year, we were confident we had built an extremely solid foundation for the project. We were ready to present the work we had done to the community through the launch of our awareness campaign. Up until this time, very few people had heard of Havven, but we were optimistic that what we had built would resonate. The response over the last week demonstrates that we significantly underestimated just how much interest the project would generate. Obviously, a lot of this had to do with the volatility in the markets over the last month, as well as concerns around Tether, but we also created a large airdrop campaign to get people excited about the launch. Collectively, these elements created a perfect storm and our small community exploded overnight.

Between the end of January and the 11th of February, we went from a few hundred enthusiasts to one of the most popular crypto Telegram channels in the world (with over 90,000 members). We’ve now been approached by hundreds of people looking to participate in the Havven project, with allocation requests exceeding USD$80 million.

While this is extremely positive, we were also concerned, because we had over USD$25 million in purchase requests during our expression of interest period. Based on the demand we have observed, many people will miss out on the token sale. Additionally, the structure had no cap on contribution size per participant. In hindsight, this was a mistake. Throughout this process, we have attempted to create a fair sale. We haven’t offered bonus discounts for large purchases, and we haven’t restrict participation in our expression of interest period to large purchases. Despite these measures, the current structure of the sale is no longer adequate to meet the demand.

In light of this, we have made the decision to revise the structure of the sale. We will be creating a new tranche of USD$10 million, and we will be limiting this tranche to purchases of $10k USD or less. The purpose of the sale has always been to establish the value of the collateral pool while ensuring a wide distribution of collateral. This is critical in a stablecoin system, as we need enough circulating currency to meet demand. For more details on this, please see our blog post. This is why the entire additional USD$10 million will be allocated to the collateral pool of ETH-backed nomins at launch. This means that we will be able to launch with at least USD$10 million in circulating currency. While this is still a tiny fraction of the supply needed to meet future demand, it will allow us to gather crucial data before enabling the creation of havven-backed nomins.

How this change affects the sale

This means that the sale will now be structured in two sections. The new section will only be available in allocations of less than $10k USD. This is to ensure that as many people are able to participate as possible. If the average purchase from this section is USD$2000, this will add an additional five thousand people to the network who would have otherwise been excluded.

We have the original USD$30 million where the offer remains the same. Anyone who registered an expression of interest before the 31st of January, 2018, will qualify for the 30% discount (with a 12 month escrow) during the token sale. Expressions of interest will have from the 21st of February until the 28th of February, 2018, to complete their purchase. After the first day of the token sale, if expressions of interest remain unpurchased then these amounts will be released to the pool and may be purchased by anyone.

While raising the hard cap in a sale is never ideal, we feel that it is in the best interests of the network and the supporters of the Havven project. This will result in a more equal and less centralised distribution, with more collateral for the launch of the network.

A not-for-profit foundation is being established in Australia and that foundation will provide governance to the network. This means that the proceeds of the sale will be fully applied to the maintenance and further growth and development of the platform. We will have an announcement shortly about the composition, structure and governance of the foundation.

We are also ready to announce the schedule for the escrow of the proceeds of the token sale. A challenge for us is that we need access to the ETH collected in the sale in order to issue collateral. However, we also need to restrict the movement of funds until specific milestones are met by the foundation and the team. This is, of course, best practice for every token sale.

The hard cap for the sale is now USD$40 million. Once the collateral pool of USD$10 million is established, the foundation will not be able to withdraw the ETH from the contract until certain conditions are met. These conditions will be announced once the audit of the smart contracts has been finalised.

Of the USD$30 million remaining from the sale, USD$10 million will be unlocked at the conclusion of the sale, and the remaining USD$20 million will be subject to the same conditions as the collateral pool. This ensures that only minimal funds are available until the network matures.

We are confident the measures outlined in this post will adequately offset the modification of the sale structure. We would like to thank everyone who has reached out to let us know how excited they are for the launch of the Havven network. Our team has spent over a year on the project to ensure we launch with the best network possible, and it is gratifying to see such enthusiasm for a decentralised payment network that enables stable, permissionless and censorship-resistant transactions between anyone anywhere in the world.

We look forward to a successful sale and launch of the Havven network in March 2018.