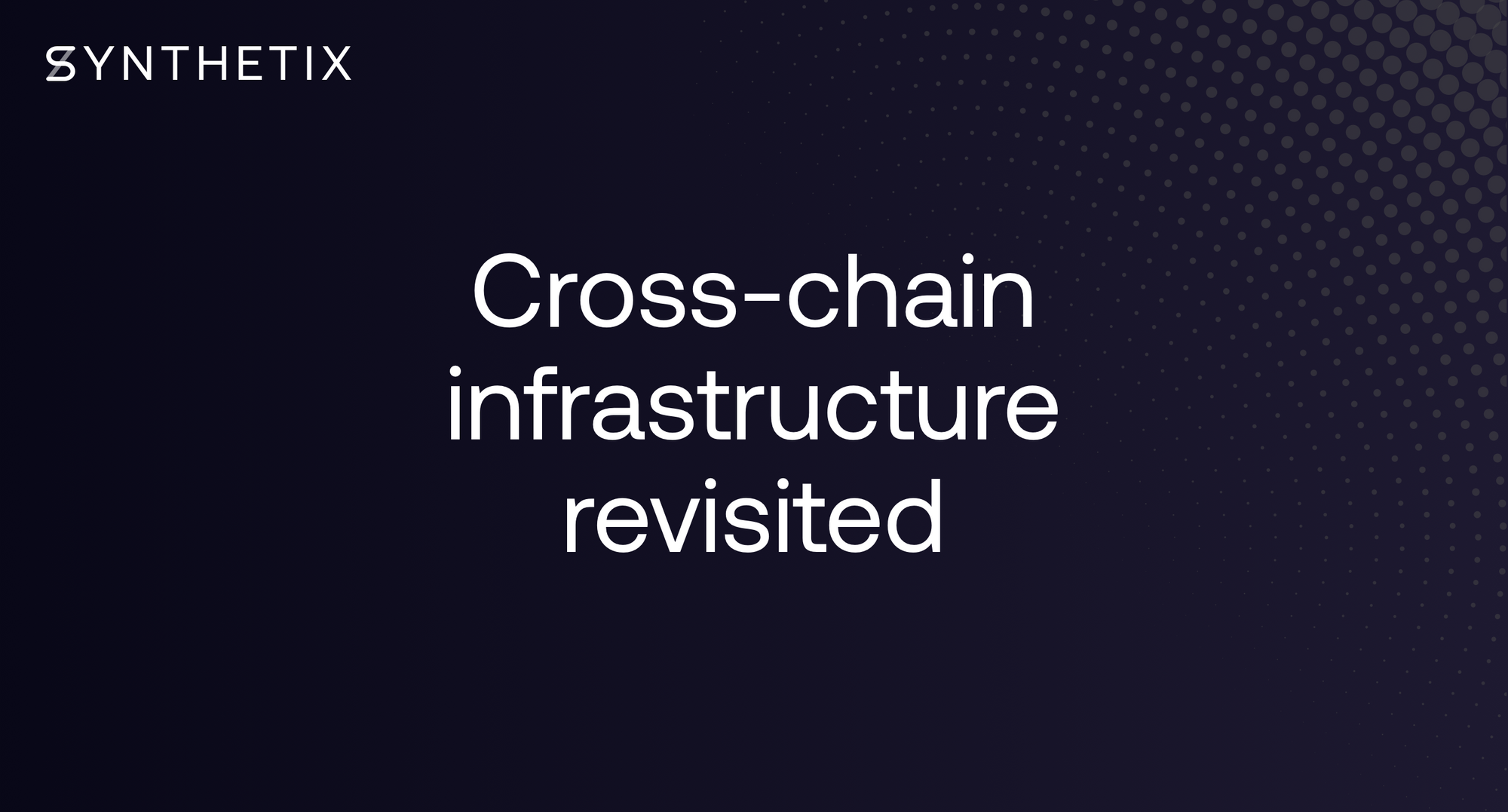 I first wrote about cross-chain infrastructure in a post published in August 2018, a little over a year ago. A lot has changed in that time! DeFi didn't even exist, it was a few weeks later that members of Set Protocol and Dharma coined the term DeFi. I want to use this article to explore the lessons learned since then and what they mean for Synthetix and other DeFi projects building on Ethereum.

The original post took a fairly agnostic approach to the question of infrastructure on decentralised systems. At the time there were very few deployed smart contract systems live on Ethereum. We have significantly better data on Ethereum and other platforms now, what has become clear is that network effects on Ethereum are likely far more powerful than many people, including myself, anticipated.

The reasons these network effects have been overlooked is probably because we are used to platform competition being the norm; Android vs iOS, Kindle vs Nook, Chrome vs Firefox as just a few examples. So when looking at smart contract platforms it felt intuitively like they would play out in a similar way. But platform fragmentation emerges mainly due to competition for end users. The closer to the end user platforms are the more likely fragmentation occurs. However as platforms are abstracted away fragmentation tends to decline and network effects are amplified. Many of us by virtue of both using and building on Ethereum became confused about where in the stack L1 falls. Sure you can use Ether for value transfer, but that is not what the majority of users will be doing. They will be using DeFi apps, NFT-based games and decentralised social platforms. Users don't care what applications run on, they just want the best user experience. Now let's dive into the specific network effects at play:

Let's start with tooling. Our CTO, Justin, spent several months doing R&D into deploying Synthetix onto EOS. What he found was that the tooling was extremely immature and that in order to support a complex smart contract suite it would have taken significant effort to even approach the level of functionality available on Ethereum at the time. This gap has only increased during crypto winter as the Ethereum ecosystem has grown while other smart contract platforms are yet to launch or have stagnated. This was evidenced in a recent report that indicated that the Ethereum has more engineers working on it than all other smart contract platforms combined. I would argue this likely underestimates how much larger the Ethereum developer community is compared to other chains. The reality is that it will take years to catch up to the quality of developer tooling on Ethereum, even massively overcapitalised networks like EOS and Tezos have failed to deploy capital to bridge this gap. My view is that this is mainly due to the level of central planning in those ecosystems, something that is never going to approach the level of efficiency of the competitive marketplace Ethereum has become. Oddly the exception to this is Tron, as their approach of cloning the tooling from Ethereum and other chains has without a doubt been effective, even down to the naming conventions! TRC-20 anyone?

DeFi has now turned a theoretical advantage into a practical one. In the past many people posited that smart contracts would be wired together and the permissionless nature of these systems would allow for rapid iteration and connectivity, enabling new and powerful functionality. It takes only a glance at the digram below to realise how real this has become, and it is only accelerating.

This is just the beginning, there are literally hundreds of projects in development or about to go live that will integrate into and improve the emerging DeFi ecosystem, enabling better UX and more powerful features. This is by no means a comprehensive list, so if I have left anyone off I apologise. Hit me up in the mentions and I will tag you at the end of the post if you are working on something awesome I missed.

Even as I wrote this the winners from EthBerlin were announced, and these projects are frankly incredible. I don't think there was a single team that delivered even close to this level of end user functionality, and this is clearly due to the improved developer environment and lower barriers to entry that Ethereum now offers.

Blockchains are both technical and social constructs. It's hard to bootstrap a new social structure, but Ethereum has shown it is capable of bringing together numerous disparate groups to deliver exceptional technical and social outcomes. The recently announced Istanbul hard fork is another example of the progress that Ethereum is making at all layers, not to mention the fact that we are getting close to multi-client testnets for Eth2.0

The final component and probably the most powerful one is that Ethereum is the only smart contract platform where both Ether and some tokens have begun to capture a monetary premium. Dai is probably the best example, but this has a compounding effect as new contracts can tap into this and leverage it to bootstrap quickly. Uniswap was able to utilise the Ether monetary premium to rapidly scale a new type of decentralised exchange. This would be far harder on a platform that had a base layer asset with lower liquidity and total value. There is literally billions of dollars worth of Ether waiting to be deployed into novel user cases, no other smart contract platform can reasonably hope to compete with this in the short to medium term.

Some people have argued that most of the developers who will be building decentralised systems are yet to arrive, so there is still time for a leader to emerge and for new platforms to capture mindshare. I believe this is a naive and self-serving assumption that ignores history. We need only look at two examples from recent tech history to see how hard it is to displace open source platforms once network effects kick in. The first is Javascript, which in-spite of years of ridicule and misunderstanding managed to not only survive but to become the most used language for web development. The second is Linux, which overcame the resources and marketing one of the most valuable companies in the world at the time to be the OS for the entire internet. Again this was due to the tooling that grew around it in the early years and the fact that almost anyone could build and improve on it. That said, FreeBSD has had a resurgence over the last few years, but only after almost two decades of Linux dominance. Crypto moves fast but I doubt we will see meaningful competition to Ethereum in the short term.

The previous article argued that capital allocation would mean that numerous innovations would exist concurrently on different platforms, creating an environment where teams would be forced to choose between competing platforms with various trade-offs. While that was a theoretical possibility, the reality so far is that the biggest driver of where to build is where the existing users are, and that is Ethereum. If it were simple to bootstrap a new ecosystem the App store would have been outcompeted long ago. But developers build where the users are. So the biggest risk to Ethereum is that the users desert the platform. This is of course a possibility, but so long as the main use cases are DeFi, trading & speculation it is unlikely there will be a mass exodus. The equilibrium right now is Ethereum, and it will take significant effort and luck for this to change in the near term.

Since its launch in 2015, Ethereum has been the dominant smart contract platform. In addition to demonstrating the strength of first mover advantage in this space, Ethereum has also proven that incumbents like Bitcoin can lose mindshare to systems that offer new or improved functionality.

This quote from the original article attempted to show how incumbents could be unseated. However, it missed the mark in that Ethereum was a 10x improvement on Bitcoin for enabling innovative solutions. So far we have not seen any 10x platforms emerge to challenge Ethereum, and the first mover advantage is extremely strong now. Simply being faster or having "more governance" is unlikely to be sufficient to shift the equilibrium. Even if you argue Ethereum is an inadequate equilibrium, those can be the hardest to break out of!

So while everyone is allocating capital towards the next Ethereum killer, the reality is they would probably be better placed allocating capital to the smart contract suites building on Ethereum, that is where the 10x, 100x and even 1000x returns are likely to be found in the next five years. Especially as the competition for next generation smart contract platforms is so high that valuations are unsustainable, and the RR is often frighteningly low.

To take a more optimistic view, let’s assume you need all five (components) but there is a 50% chance any one will be successful. That gives you a 1/32 (3%) chance of finding five successful components on one chain. Considering we are rebuilding the entire financial infrastructure for the world, this is not ideal.

This quote, from the original article, while technically accurate contains a flawed assumption. It treats the distribution of infrastructure protocols as random, when in fact the empirical evidence suggests they all emerge on Ethereum and are only then copied to other chains later if at all. Given an environment like this, the winning combination will ALWAYS end up on Ethereum, with maybe a small chance of the same combination being replicated elsewhere.

As a critical piece of decentralised infrastructure, and one of the few projects with an operational system, we have made a commitment to implementing on multiple chains. We hope our investment of time and resources will inspire other projects to consider this approach, for the benefit of the entire ecosystem.

The harsh reality is that we were dead wrong here. Rather than diluting our focus, which likely set us back 3-6 months we should have doubled down and put all of our effort into Ethereum. While we have recovered somewhat from this mistake last year, probably the only valuable lesson for the community is the exact opposite of what we proposed in the original article. Focus on one platform and execute with extreme attention to detail and you will be far better off than splitting your efforts across multiple platforms. We take an iterative approach to everything we do and that includes both strategic and tactical planning. Our brief foray into EOS was enough to conclusively demonstrate for the time being that we must focus all of our efforts on Ethereum.

What does this mean for the EOS airdrop, the Havven OG's ask? Unfortunately it means it is being culled. While some token holders may be disappointed by this, we can do no more than ensure that we have explored and tested each path and this one was non-viable.

One final note on interoperability chains, Cosmos and Polkadot being the two most well known. I believe there is place for them, because we will almost definitely see more projects launch their own chains, Binance DEX as one example. Without the ability to move assets from these chains onto Ethereum they will likely end up siloed and only bridged by centralised services. Similarly parachains allow projects to deploy smart contract logic as base layer protocols, whether this trade-off overcomes the loss of composability and the challenge of building a monetary premium for their base layer assets remains to be seen though.

As always we appreciate the feedback from our community as we explore this problem space, and we are excited to put all of our energy into Ethereum as we witness the incredible proliferation of infrastructure improvements that are emerging each week.