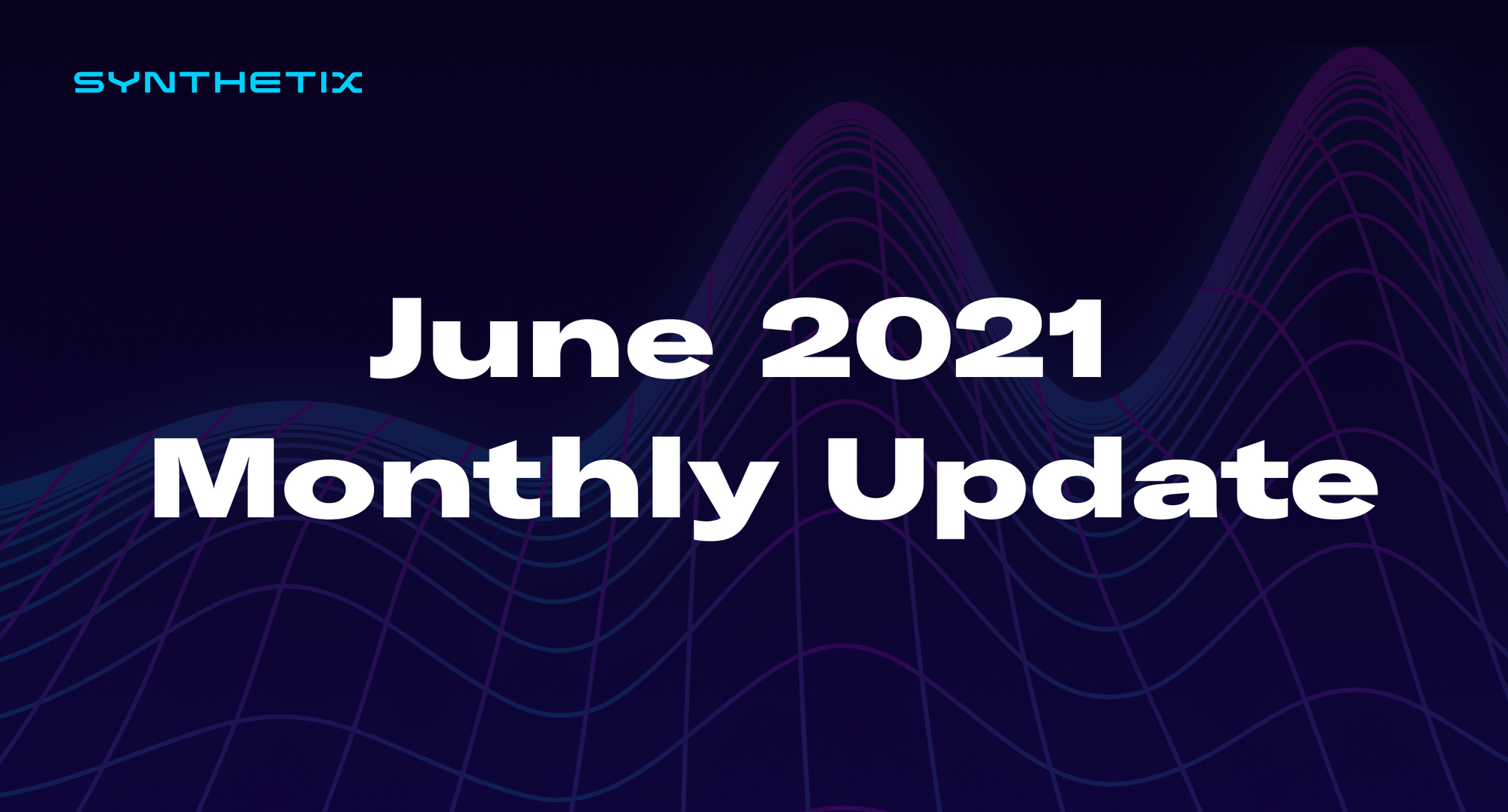 Monthly updates are back! Here to provide a regular infusion of Soonthetix energy, and June was certainly another exciting month for the Synthetix community. This month, further progress was made on our L2 deployment, we are closer than ever to trading on the OE L2 with futures not far behind, governance continued to evolve in interesting and exciting directions, and other major upgrades to the protocol began to take shape.

“When L2?” is the question on everybody’s mind, and with good reason. Deployment of Synthetix on the Optimistic Ethereum L2 will catalyze an enormous leap forward for the protocol. Like with development of other novel infrastructure, nailing down precise timelines for this is non-trivial. Justin touched on this a bit in an AMA earlier in June (see here for recording). In short, there are a number of other teams (Chainlink, Uniswap, Maker, etc.) that have been porting their code over to OE, and in the process some issues with things like gas complexity calculations, integrations with MetaMask, etc. have surfaced. Collaboration between the Synthetix and Optimism communities has helped make OE one of the most battle tested Ethereum L2’s, and every bug that gets surfaced and addressed now during this beta phase is an issue that won’t be surfaced with a public main-net.

In accordance with SIP-137, elections were held this past month for all three Synthetix governing bodies (Spartan Council, grantsDAO, ambassadorsDAO). This epoch’s election featured a near-record high turnout with several close races as well as some turnover within all three DAO’s, including one fairly recognizable new face on the Spartan Council.

The Synthetix governance framework also saw continued evolution last month. SIP-141 formalizes the responsibilities and role of the grantsDAO, and also lays out plans to expand the scope of initiatives supported by the grantsDAO. It is expected that the ambassadorsDAO will follow suit in the near future.

While the grantsDAO and protocolDAO have been folded into a decentralized governance model, the synthetixDAO has yet to be incorporated into that framework. To address this, SIP-155 builds upon the decommissioning of the Synthetix Foundation and lays out a plan for the deprecation of the synthetixDAO and proposes to replace the legacy synthetixDAO with two new decentralised governance bodies: The Treasury Council and the Core Contributor Committee. If passed, this SIP will put all aspects of Synthetix governance under the control of token holders.

Parenthetically, last month we also saw the governance dilution mechanism utilized for the first time. For those who aren’t familiar, dilution is a process that allows SNX stakers to dissent on the decisions made by their chosen Spartan Council delegates by diluting their voting power for any specific SIP or SCCP. To see this mechanism effectively utilized in the governance process is a true testament to the power and decentralization of the Synthetix governance framework.

One of the more interesting developments recently has been the evolution of the ETH wrapper since its launch. After a slow rollout in May, the ETH wrapper contract now contains 175,000 ETH and has generated almost $2 million in minting fees for SNX stakers. More philosophically, wrapper contracts are an extremely useful primitive that can be used to introduce external collateral into the system (in addition to ETH and BTC-backed loans) and satisfy market demand for synths to stabilize synth pegs. Further experimentation with wrappers like this is expected in the future.

Last but certainly not least, another exciting development from the past month was that synthetic futures were launched on our private L2 test-net. Deployment to Kovan won’t be long and then OE main-net after that, so stay tuned for more updates on that front! :rocket: