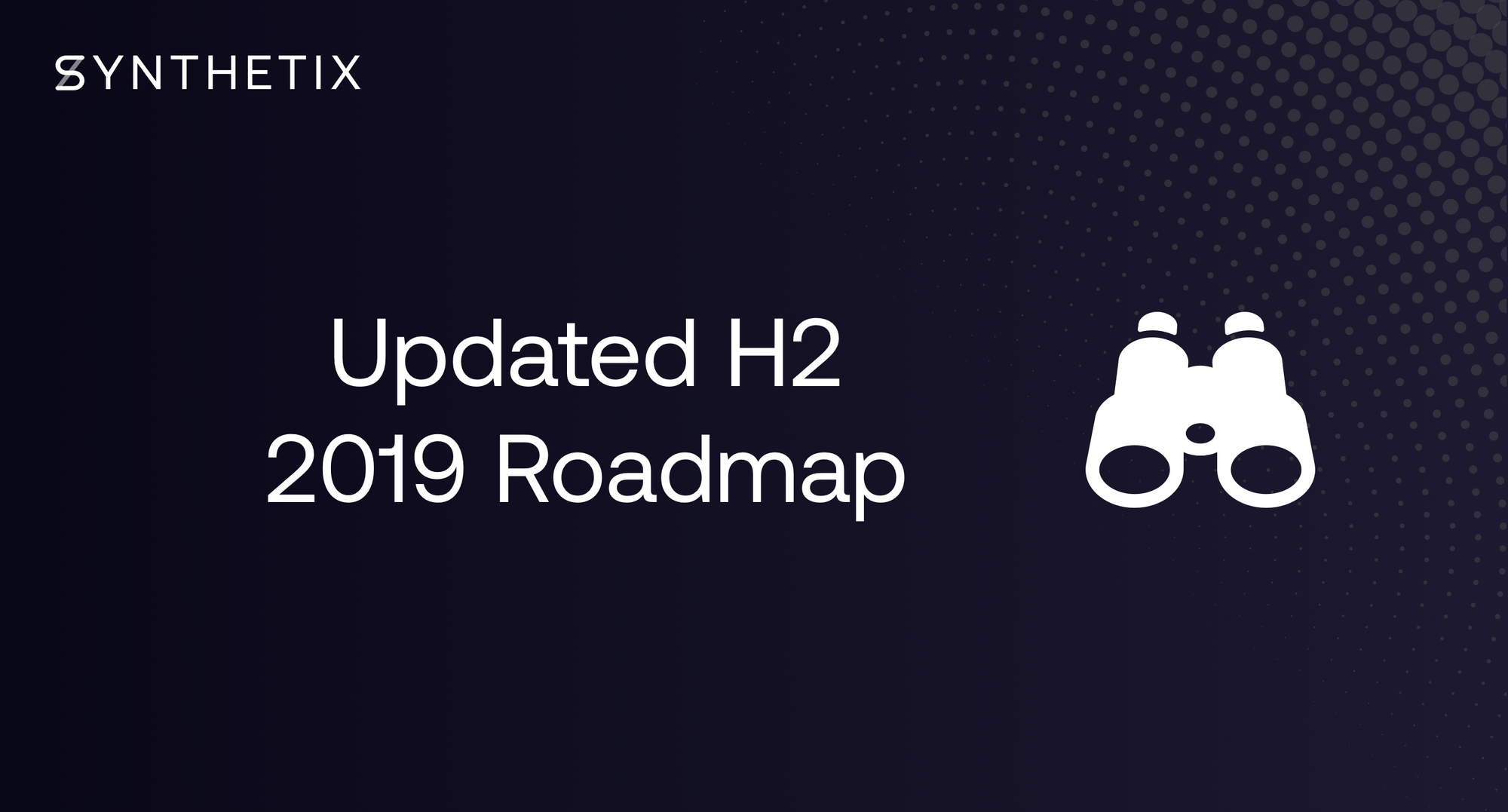 We’ve reached the halfway point of the year, so it’s time to update the Synthetix 2019 roadmap. It’s been an exciting six months of incredible growth, we’ve just passed $60m in total trading volume on Synthetix.Exchange!

Before we go over the plan for the rest of the year, let’s run through what we’ve delivered from the 2019 roadmap:

We’ve also implemented a number of improvements that weren’t in the original roadmap:

Front-running protection
Synthetix.Exchange now processes tens of millions in exchanges per month, so it is a major target for bots attempting to front run prices. There are already several protection mechanisms in place, and we recently added another one, but as these bots become more sophisticated we will continue to make these mechanisms more robust.

Dashboard improvements
We have added a number of new metrics to enable users to track the network, including Synthetix.Exchange stats and metrics on the distribution of Synths.

sUSD Peg restoration mechanisms
We have changed the rewards claim process, removing the tiered penalties in favour of blocking rewards once users fall more than 10% below the target C ratio. We also lowered the number of claimable periods from six to two to speed up the feedback loop between changes to the system and user behaviour. Finally, we raised the C-Ratio from 500% to 750% to reduce the supply of Synths and help restore the peg.

Purgeable Synths
Purgable synths allow the system to re-instantiate inverse Synths once they have been liquidated, and they also enable the removal of unused or low value Synths in order to save gas costs.

Let’s move on to what we’ve got planned for the second half of the year!

Synthetic positions
The popularity of Bitmex and other derivatives platforms demonstrates there is massive demand for sophisticated trading tools, and we have already shown Synthetix.Exchange offers features unavailable anywhere else on Ethereum. We hope to offer leveraged trading, triggered orders, options and futures later this year.

Oracle improvements
Now that Chainlink has reached Mainnet, we’re one step closer to partnering with them to enable decentralised price feeds to strengthen our oracle.

Additional crypto Synths
sBTC, sETH, sBNB, sTRX, sXTZ, and sMKR are all already live, but there are still many more synthetic cryptoassets we plan to add to Synthetix.Exchange.

Synth Lending
Lending of Synths to trade on synthetix.exchange will enable new users to trade on the exchange without having to commit to purchasing Synths. This will provide confidence for new users wanting to test out the platform before converting significant amounts of ETH into sETH or sUSD.

Layer 2 solutions
Our suite of smart contracts is highly complex, so there are a number of ways that L2 scaling solutions could improve the system. These potentially include adding payment channels that processes exchanges and faster oracle updates via sidechains.

Gas optimisation
Our contract calls currently use significant gas, so in order to improve the usability of the platform we are undergoing R&D on a number of gas optimisation strategies, including L2 calls, off-chain computation and implementing some code in Vyper.

Mintr v.2
We are in the process of totally revamping Mintr’s interface to be far more user-friendly. This will include a number of improvements, including the ability to send SNX and Synths from within Mintr.

In addition to these planned features there are a number of changes to the system that are currently being reviewed and debated within the community via the Synthetix Improvement Proposal process, some of these have been proposed by the team and some have been submitted by the community. Whether they are implemented will be dependent on the feedback from the community over the next few months. To provide input into any of these proposals, please either join us in Discord or on our regular community governance calls.

Decentralised proxies
We employ proxies to enable contract upgrades without requiring token swaps. The Synthetix team could never have iterated on the platform as quickly as we have without the current proxy design. However, there are ways to incorporate decentralised governance into the process of deploying new contracts, and we plan to explore them this year.

Ether Collateral
There have been concerns raised about using SNX as collateral due to the lack of liquidity. Adding Ether as collateral could help alleviate these concerns, however, there are a number of trade-offs with this approach and there is some disagreement among the community about how effective this will be. There is also the concern that we are trying to reduce supply at the moment and adding ETH will have the opposite effect.

Improved Delegation Powers (Community SIP)
We have implemented a change to allow a wallet to delegate fee claiming, this SIP extends delegation powers to include other actions like minting and burning as well as exchanges. This will be a very useful improvement to the system as it will allow someone to delegate this functionality to a hot wallet in a mobile app and then control their wallet without risking funds since transfers will not be possible via delegation.

Non-discretionary Issuance
Allowing users to mint directly to their own wallets has had a significant impact on the peg, as some users are selling the minted Synths to take a leveraged position on SNX. By forcing all issued Synths directly into the depot, the ability to leverage synths for SNX exposure is reduced, which will have a positive impact on the peg, but could impact Synthetix.Exchange volume.

Depot Upgrades
In order to support non-discretionary issuance we need to improve the depot mechanism, moving towards a system more like uniswap where depositors get liquidity tokens that entitle them to a claim on the ETH in the Depot pool, rather than a FiFo queue.

Account Merging
Due to the way that staking rewards are distributed moving SNX between wallets that have been staking can be challenging. Allowing users to migrate staked SNX and SNX rewards will significantly improve the user experience. There is a risk that this could allow users sell their SNX staking rewards before they have vested, but given that the entire wallet will need to be migrated this is not a practical solution to selling before tokens have vested.

Liquidation Mechanism
We do not currently employ a liquidation mechanism, and there are a few reasons for this. The most important reason is that the current buffer of 750% makes it unlikely that many users will have their C-Ratio fall enough to be liquidated. The secondary reason is that liquidation is unlikely to improve the peg as most users keep a surplus of Synths in their wallets to allow for C-Ratio adjustments.

sETH Pool Staking Rewards
We have recently launched a trial of staking rewards to encourage users to deposit liquidity into the Uniswap sETH pool. If this trial is successful a SIP will be created to review whether these staking rewards should be implemented at the protocol level.

The Synthetix community and team have been thrilled by what we have all delivered together so far 2019. It’s been great from a tech and adoption perspective, but just as importantly we’ve loved having the support of the community throughout the year. Thanks to everyone who has engaged with the project so far, and hopefully the second half of 2019 will be one to remember!