Whenever a trade occurs on Synthetix on mainnet, there is a waiting period (10 mins). During this waiting period, users cannot exchange, transfer, or burn the Synth they have just traded into. This waiting period gives the oracles enough time to check the difference between the initial price and the new price — in other words, they check to see if a trade was affected by a lag in price updates. Read more about Fee Reclamation.

While this fee reclamation waiting period protects stakers from front-running, it is a subpar trading experience for most traders. On Optimism, block speeds are much faster, and speeds are lower, which is why fee reclamations aren’t necessary and oracle latency is much less of a problem on Optimism.

Waiting 10 minutes to find out what price your trade settled at isn’t ideal for traders, which is why Atomic Exchanges were introduced.

Atomic Swaps are a new exchange function allowing users to atomically exchange assets without fee reclamation by pricing synths via a combination of Chainlink and DEX oracles (Uniswap V3). Using both chainlink and Uniswap V3 protects stakers from frontrunning and allow traders to access low slippage and low fees from Synthetix. This functionality will only be available on Ethereum's base layer (L1), because there is no fee reclamation on Optimistic Ethereum (oracle latency is much faster).

Atomic exchanges are the reason for most of Synthetix’s mainnet volume on Curve, 1inch, fixed forex, and many other aggregators and integrators. It is a powerful tool that leads to significant volume without frontrunnable risk because of the unique pricing model.

Read more about the Atomic Exchange Function updates in SIP-198

Synthetix's trading volume has vastly increased in the last few weeks due to 1inch integrating with Atomic Swaps. 1inch traders gain access to another path of liquidity, with no slippage and low fees, and SNX stakers receive trading fees from hundreds of millions in trading volume per day.

An average of $100-200 million in volume are being generated daily, with about $300-600k in trading fees being returned directly to SNX stakers.

Integrating Atomic Swaps helps to provide the best fills for users on 1inch, and other aggregators are planning to integrate. Interested in integrating? Reach out on Discord or Twitter. 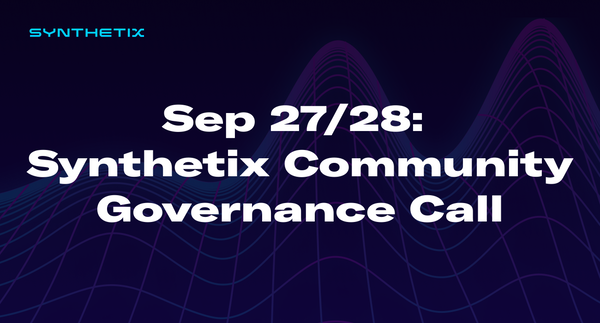 The next Synthetix community governance call is scheduled for Tuesday Sep 27th at 8pm UTC (9/27 afternoon/evening for western hemisphere; 9/28 morning for eastern hemisphere), and we’d love for you to join us! We'll be holding this event on our Discord, RSVP now at https://discord.

💡Updated 9/26/22 to reflect the removal of the nomination period with the passage of SIP 278. Nominations are now possible during the voting period. Nominations for the next epoch's Synthetix Councils (Spartan, Grants, Treasury, and Ambassador Council) will open later, Sep 10th at 0:00 UTC! The epoch